SAILORS AND SHIPS IN LOST ARK - WHAT TO BUY AND UPGRADE 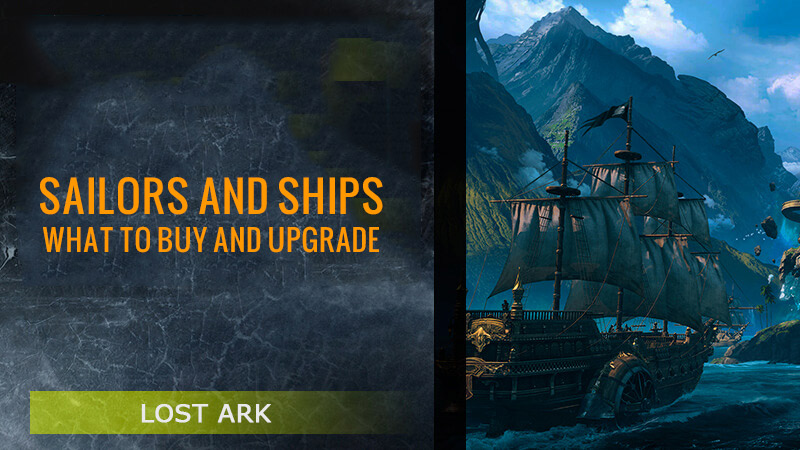 You probably realized that marine content is a separate and independent game that contributes a little to the development of your character. So let's figure out what to do and how to spend time more efficiently on this piece of content.

The clear favorite is Icebreaker. Its main advantage is that already at the 4th level of the ship. We can put three sailors at once. The ship also has a 5% chance to receive valuable cargo when lifting chests from the bottom. An icebreaker can easily be upgraded to level 5. To upgrade further, you will need legendary blueprints. Where can you get them?

At the moment, I know two ways.

First. Diving into purple holes as a level 3 sailor. Such a sailor can be bought in the port of Lutherie. His name is Jacob. But not everything is so simple. We need 500 Givena Tokens. We will return to this currency a little later.

The second way to get blueprints is Reef Undermining. And here, too, there are nuances. First, we need a level 3 sailor - horses. It can be obtained on Tortoik as a reward for collecting 525 Mococo Seeds. And this is not the most difficult. Next, you will have to look for those very reefs, blow them up, board the ship, and there is a chance that a legendary blueprint will fall out of the chest. For me, the second option is tedious.

There is another way. This is a chest purchase from a traveling sea trader for 500 pirate doubloons. I met this merchant only one time in the entire game. The algorithm of its appearance is not known to me. I met him near Totosilver Island at 15:00 Moscow time.

Choose which method you like best and farm these blueprints. Please note that this is not a quick matter, but rather for the future.

So we figured out how to improve ships using the Icebreaker as an example. Other ships are improved according to the same principle.

Let's go back to Jacob. How to get 500 Givena Tokens faster? Most of these tokens fall when raising treasures from the bottom. There is also the task of the Efon Union "Emancipation of Slaves". For this task, we need to redeem five enslaved people. Enslaved people are redeemed for pirate doubloons. Doubloons will be spent, which means they need to be farmed—doubloons farm well by diving. However, when diving, we are less likely to get Givena Tokens.

So what is better, you ask - diving or chests from the bottom? You need to do both if only to pull out the Hearts of Giants and paintings for collections. I'm diving right now because I need doubloons to ransom the enslaved people. When I close the reputation of this quest, I will switch back completely to chests. Mini Bonus: On the island of Afares, you can get 5 Givena Tokens weekly.

Since we are sailing on the Icebreaker, we take three sailors. For diving, we take:

With this composition, we go to the Sea of ​​\u200b\u200bSirens and dive into the blue and purple holes there. Sometimes we don't get rewards in purple, so I focus on blue.

To raise chests, we assemble the following command:

With this composition, we immediately set off for the Ice Sea. We select both blue and purple chests.

If you do not have enough time for marine content, and luck points are accumulated to the maximum, I recommend using sailors, who increase the cost of spending luck points by three times and at the same time give two times more loot. It is not economically profitable, but it is better this way if you do not have time. The Nell Lifting Sailor is sold in Shuvierde for 600 doubloons, and the Cervantos Diving Sailor is purchased in Lutheria for 600 doubloons.

We have decided on the starting teams. But which sailor should I buy first with Givena Tokens? I think you guessed it yourself - this is Jacob. And the loot will be better, and the legendary blueprints will start farming.

What about fishing and harpoon hunting? Previously, these professions were less profitable. I have not researched this content. Later, I may buy these sailors, test each activity, and if there is something valuable and useful, I will make another guide.

Useful sailors for other types of currencies

You can farm Ancient Amulets by blowing up reefs, preferably a horse-horse 3rd-level sailor. You can buy Sailor Fire for 200 Ancient Amulets on the Cruise Ship. This sailor has the 3rd level of raising treasures. Swims only on the Icebreaker. With him, there is a better chance of getting Lost Ark currency. Sailor Fire is good and necessary. We are saving up the currency. When we get this sailor, I recommend accumulating 200 Givena Tokens and buying the sailor Randolph in Shuvierde. He also swims only on the Icebreaker and gives two cool bonuses at once - 10% to trophies and a six-unit reduction in the cost of luck.

Sailors in the future

On Liberty Island, sailors can be bought with Black Fang Signets. The currency is hard to farm. I will note that a good diving sailor, Sofia, saves as much as 14 points of luck. But there is one drawback - it can only be put on the Clipper ship, which is not easy to make.

Star Song Lighthouse. To undermine the reef and raise the treasures of the 4th level. Here, for Restless Souls, you can buy two cool, possibly top sailors. However, not only are souls difficult to farm, sailors are only compatible with the Ghost Ship. So let's forget about these sailors for a long time.

In Ardeitan, there are sailors for the Battleship for Proceus Tokens. We can't get tokens like that yet, and we don't have such a ship. We're putting it off for now.

There are two more useful sailors in the port of Bern - a level 3 diver and sailor Shirley, who saves seven luck when diving and increases the depth by 45 meters. However, both sailors sail only on the Barka. This ship is not yet available either.

Summarize. We sail on the Icebreaker, raise the chests, spend the first Givena Tokens on Jacob. Having bought it, we begin to dive. Gradually we accumulate Ancient amulets. On the Cruise ship, we acquire Fire. And when the Western Sea is opened, we begin to raise the legendary chests there. This plan will last for a long time, and I will stick to it.

RELATED: WHAT TO DO AFTER GETTING LEVEL 50 IN LOST ARK - GUIDE!

Who is among the most well-known player in the 75th IV bundle?

Haywire, a all new celebration in 2K22, has actually pretty much satisfied you, and also the regulations and also incentives will certainly be several for each online game player entering Haywire

How to get Void Equipment in Lost Ark?

Abyss Equipment is some of the best armor you can get in the game. In Lost Ark, your gear will help you get through the dungeons and raids you face. No matter how much you grind or level, low-level equipment will prevent you from completing certain quests and storylines.

Lost Ark: How To Get All 12 Music Tracks?

Each class in Lost Ark has an instrument that allows them to play different music, all of which have a different effect: teleportation opening backdoors. So here's where to get the 12 tracks from Lost Ark!